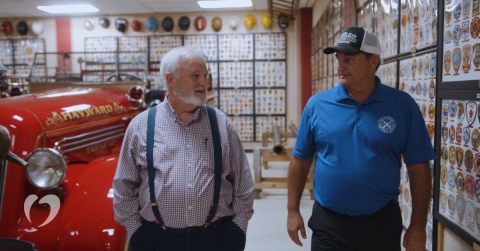 Heart disease affects people from all walks of life, and recognizing the signs and symptoms early is key for good outcomes. Sometimes, however, heart disease symptoms can take even a safety-oriented and well-trained person by surprise.

Retired Stillwater Fire Department Chief Chris Neal is one of those people. It wasn’t until he began building a writer’s cabin for his wife, a teacher and writer, that he began to realize his symptoms indicated a problem with his heart.

“I noticed more and more over time that I’d have to take more and more breaks. And it was at that point that I realized, most likely, I did have a problem. I had to face reality,” Chief Neal said. Once he realized something was wrong, he headed to Oklahoma Heart Hospital the next day for a heart scan, which resulted in a serious diagnosis.

After surgery and beginning the road to recovery, Chief Neal is thankful for the attentive care he received at OHH and credits them with preparing him for what to expect during surgery, how to minimize the pain during recovery, and how to rebuild his strength. He claims everyone he dealt with from the front desk workers to the surgeons were “incredibly professional, focused on you, and I think, above all things, kind.”

Chief Neal has a message for firefighters in particular. “Don’t ignore the symptoms. You could go in and get a scan, and it may save your life. It did mine.”

Thanks to a program in partnership with Oklahoma Blood Institute, OHH aims to raise awareness of blood donation and heart disease among firefighters. Hearts for Heroes provides a free heart scan to all active and retired firefighters who give blood twice before September 30, 2021.

After giving blood twice at OBI, firefighters will receive a card for a free Heartview CT scan at Oklahoma Heart Hospital. The scan looks for plaque in the blood vessels in the heart, which can build silently and dangerously. The scan is quick and easy, and it doesn’t even require changing clothes.

Similar to the scan that diagnosed Chief Neal’s heart problem, a Heartview CT scan can save the lives of heroes by helping them take care of their hearts. If you are a firefighter or know one, ask about the Hearts for Heroes program the next time you give blood through the Oklahoma Blood Institute.