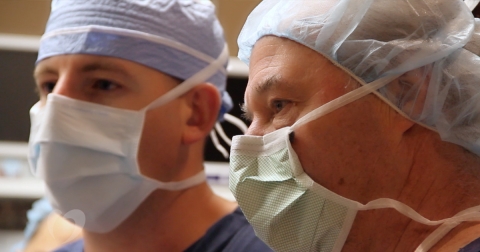 Surgical ablation is used to treat atrial fibrillation in patients for whom other treatment options, such as medications and catheter ablation, have not been successful. The Oklahoma Heart Hospital uses two types of surgical ablation: convergent (or hybrid) ablation and Cox Maze IV ablation.

The convergent ablation procedure combines the expertise of a cardiothoracic surgeon and an electrophysiologist to approach the ablation from both the outside and inside of the heart. The combined approach involves small incisions in the chest or upper abdomen, plus a small incision in the groin to insert the catheter used for ablation inside the heart. In this procedure, the ablation creates scar tissue to block the electrical signals that cause atrial fibrillation. While the incisions are small, the procedure is still heart surgery that requires a hospital stay for two or three days plus several weeks or more of recovery before returning to normal activity.

Compared to other surgical ablation options, the convergent procedure is less invasive due to the smaller incisions and has a shorter recovery time. Risks include possible infection, bleeding, or damage to the heart or lungs. The convergent ablation is also a relatively new approach to treating AFib and clinical trials are still in progress, so long-term effectiveness and success rates are not yet known.

The Cox Maze IV procedure has been available for many years and is very effective at treating patients with AFib. However, it is open-heart surgery that may require several days in the hospital and four to six weeks for full recovery. Because of the invasiveness of the procedure, it is not often done as a stand-alone surgical procedure. Rather, the Cox Maze procedure typically is performed alongside another heart procedure, such as a valve procedure, bypass, or other cardiac procedure.

Advantages of the Cox Maze procedure include increased visibility and direct access to all chambers of the heart for the surgeon, as compared to catheter ablation or convergent ablation. Risks include possible infection, bleeding, or damage to the heart or lungs.

After surgery your doctor may advise you to continue taking both blood thinners and antiarrhythmic medications for several months while continuing to monitor your heart rhythm to ensure no recurrence of AFib. Surgical ablation is a successful and life-changing procedure for the majority of patients. Like catheter ablations, successful surgical ablations can be a cure for abnormal heart rhythms that allow patients to return to their normal level of daily activity after recovering from the procedure.

Surgical ablation for Afib, whether through the convergent procedure or the Cox Maze procedure, may not be a good fit for all patients. Since atrial fibrillation alone is not a life-threatening condition, surgical ablation can be scheduled whenever the patient is ready. Patients with extensive symptoms of AFib may opt for surgery as soon as possible, whereas patients with less severe symptoms may choose to continue medication rather than undergo surgery. Your Oklahoma Heart Hospital physician can answer any questions you have about the procedures and will partner with you in deciding the best course of treatment.

Questions about atrial fibrillation and surgical ablation procedures? Contact the Oklahoma Heart Hospital today for more information or to schedule an appointment.